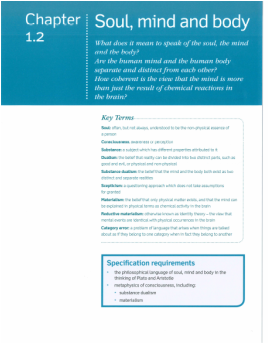 People use the term the soul in a range of ways, not always precisely, which can make it difficult for others to grasp exactly what the word means to religious believers. Some people use the term ‘soul’ and ‘spirit’ interchangeably; others talk of the ‘body and soul’ or ‘body and mind’. However, when people speak of someone having a good mind they mean something very different from when they say someone has a ‘good soul’ and again when people say someone is ’good in spirit’. The blurring of these terms can often make discussion of the soul confusing?

​In the philosophical sense ‘the soul’ is mainly used as meaning the same as ‘self’, to refer to the subject of mental states and of spiritual experience. However, ‘the self’ has a wider meaning than the soul, as the idea of ‘the self’ can include ‘mind and body’ together as one coherent person, whereas the ‘soul’ is usually used to mean on particular aspect of ‘the self’: the part that according to religious believers is capable of having a relationship with God and which carries on the possibility of living after death. For some, ‘the soul’ is the most important aspect of human nature. For others, the idea of the soul makes no sense.