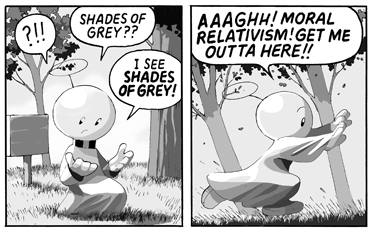 James Rachels argues that we make a false inference when we say:

1. Different cultures have different moral codes.
2. Therefore there is no objective truth.

The false inference lies in the "therefore". Both appear to be statements of fact.
But statement (2) is actually a belief. We cannot prove the case that there is no objective morality, and it doesn't follow from the observation that there are different moral systems in the world.

After all, we can have different belief systems (as a matter of fact) about whether the world is round or flat, but it doesn't change the truth or falsity of the objective claims of science.

Rachels goes on to consider some consequences of relativism:

• We can't judge other societies (such as Hitler's Germany)
• We could in principle take a vote on slavery and judge its rightness by a simple majority decision.
• We can't judge our own society and find, for example, fast driving "wrong".
• Moral progress is called into doubt, where we seem to have new laws protecting human rights, for example.

"It makes sense to think that our own society has made some moral progress, while admitting that it is still imperfect and in need of reform" (Rachels page 23).

If we go to India we may be surprised to find it's wrong to eat a cow, but this is because cows have divine status in India, so relativism is correct in so far as it reminds us that morality is relative to belief systems. Yet relativism is wrong if it claims to establish that we cannot judge some practices as universally desirable and others undesirable.

For example, all cultures protect their young, otherwise we would not survive. Similarly, truth-telling is universally accepted, because trust is necessary for survival.

And we must be humble about our own culture which may contain practices which we should seek to reform, where progress is still required.

There is a problem with this argument, however. Even in the Old Testament it seems God himself commands people to kill. For example, Joshua is commanded to destroy Jericho and its inhabitants and also annihilates the people of the city of Ai (Joshua 8), not even sparing the children.

"Then they killed all in the city, both men and women, young and old, oxen, sheep and donkeys" (Joshua 6:21)

If we argue that killing is absolutely wrong, how to we explain these apparent acts of murder (killing of the innocent children) as supposedly commanded by God himself? When does killing in war become justified?

There is a further difficulty. In court we distinguish between different degrees of murder. First degree murder is when someone kills in cold blood, for example, shooting a policeman to make good an escape.

Second and third degrees of murder have extenuating circumstances. For example, killing someone in a fit of anger because you discover they have lied or cheated on you. Then there is killing is self-defence, or shooting a burglar who you find in your house. We tend to treat the latter as manslaughter, and in law it takes a lesser penalty and sometimes, no penalty at all.

So to say "thou shalt not kill" is an absolute, even if we translate "kill" as "murder" doesn't escape the problem, "what sort of killing is acceptable"?

As soon as we admit exceptions, or particular circumstances when we would kill, we become a relativist, because we make goodness relative to some other end, such as saving a life or preventing a bigger evil.

This is an essay written by a student who is asked to explain the concept of relative morality. This is an Ao1 question and from a different spec but it will give you a good sense of structure and writing style suited Philosophy and Ethics.  I particularly like her use of link words to develop an argument, so I've highlighted them in blue.  She scored 100% on this question.